WHY TRACE YOUR ROOTS?

Tracing one’s family history is a national obsession. People have a deep-seated need to know where they come from, what makes them who they are, and whom they take after. As a psychologist I enjoy learning about people’s lives and how to help them understand themselves. Studying family history helps one to go beyond the present to learn about other people and forces that have helped to shape us.

Understanding your social, cultural, familial, and genetic heritage can shed light on your character, appearance, health, family relationships, and your name. Which side of the family do you resemble? Who do you look like at different ages? Knowing how long your ancestors lived and how they died holds clues for what to watch for in terms of medical problems for you and your descendants. Most likely your journey will help you to discover unknown relatives and to build new friendships.

Prescott B. WiskeKnowing family naming patterns gives you a deeper sense of your identity. People of the Jewish faith often name children after a cherished relative who had recently died, whereas Christians often name children after a cherished living relative. Who were you named for—a loved family member, a dear friend, a family associate, or a name that appealed to your parents for some reason? My middle name Prescott is for my maternal grandfather, Prescott Barker Wiske.

Why would someone name a beautiful African American girl, who ultimately graduated from Philadelphia Medical College in 1888, “Juan Fernandez” Bennett? What kind of name was that for a girl? Family research revealed that Dr. Bennett’s grandmother, known as Johanna F. Cuffee, was originally named Juan Fernandez Cuffee. Apparently William Cuffee, her sea-faring father, named his daughter for the Juan Fernandez Islands off the coast of South America. These islands were the first place that ships set into port after the harrowing experience of rounding the Horn.

Genealogy is much more than filling in ancestor and descendant charts with names, dates, and places. Placing your ancestor in historical context gives you a deeper appreciation for history. Knowing what their life was like and what critical historical events occurred during your ancestor’s lifetime brings your ancestor as well as history to life.

As an illustration, let’s look at one of my ancestors, Johnny Whiskey, who lived in England in the late 1700’s. As was common in those days, Johnny Whiskey was pressed into Her Majesty’s Navy. He was thrown on board a ship, and thereafter the navy became his life. Thanks to my Uncle John Wiske, who visited England, I have detailed records of every ship and the dates that my great-great-great grandfather served on. I know he served on the ship, Mars, during the Battle of Trafalgar. Amazingly, one can view on-line a map that depicts exactly where the Mars was positioned during this battle by visiting a paid subscription site on www.ancestry.com. 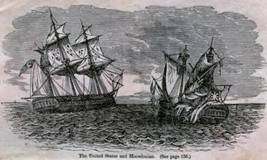 Battle of the US and the Macedonian from Thirty Years Before the MastDuring the War of 1812 Johnny Whiskey served on the Macedonian, a British frigate. Britain had a far more powerful navy and many more frigates than America, who only had six of them. On 25 October 1812, Stephen Decatur, Captain of the United States, defeated the Macedonian in a decisive battle during which the decks flowed with blood and 36 men were killed, 36 severely wounded, and 32 slightly wounded. Wanting the honor of being the first American to bring in a captured British ship in the War of 1812, Decatur decided to tow the Macedonian to shore to have her repaired. Thank goodness for America’s paltry navy or my ancestor may have drowned during the battle.

Many books portray this historic battle. Samuel Leech’s Thirty Years Before the Mast, an eye-witness account, describes how the hobbled Macedonian missed its original destination because of the fog, sailing into Newport, Rhode Island before finally reaching New London. The crew was held captive in a barn in New London. Leech actually mentions Johnny Whiskey by name as a god-fearing Christian, who eventually moved to the Catskills. (I know he moved there because I have seen Johnny Whiskey’s large cemetery marker at the Old Catskills Burying Ground in New York.)

I knew from my grand father’s unpublished biography of Johnny Whiskey, that he managed to escape from the barn and later marry Elizabeth (Betsey) Rogers in New London in 1813. Trying to find more details of the story, I visited the New London Historical Society. There I actually saw an original 1813 newspaper, which mentioned the marriage of Johnny Whiskey of the Kingdom of Great Britain to Betsey Whiskey in March 1813. I also learned that several men who guarded the “prison” barn, where Johnny was held captive, were named Rogers. I don’t know, but I like to think, that they may have been relatives, who were trying to help Betsey Rogers find a husband.

Tracing your roots will undoubtedly help you to learn about and even meet new cousins, uncles and aunts. Many people will share family stories, myths, documents, pictures, mementos and letters with you. A distant cousin learned of our relationship and contacted me because I had posted his great-grandfather’s (Solomon Mitchell Grouse) wedding certificate from 1872 on my web site. From this certificate he learned the names of his great-great-grand parents and the maiden name of his grandmother. Recently he sent me a wonderful photograph of my great-aunt, Katie Wollner Grouse, with her husband and their nine children to commemorate their silver wedding anniversary in 1897. 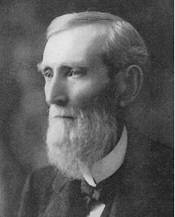 John William McCoy, esq. (1826-1902) courtesy of Ellen SuttonIn tracking down some family relationships through the Dartmouth College Alumni Association (where several McCoy’s graduated), I ultimately learned of a second cousin, Ellen Sutton, who lives in the mid-west. She has inherited a wonderful collection of McCoy letters, deeds, pictures, and other documents, which she has kindly mailed to me. Now I know what my great grandfather, John William McCoy, looks like. He bears a striking resemblance to my grandfather, Paul McCoy.

Thanks to Ellen I also have a priceless copy of a letter that helped to unravel a family mystery about John William McCoy’s father, Joseph McCoy. By visiting rootsweb.com, I was able to connect with a site about Tyler County, West Virginia managed by David Buck. This site shows that Joseph McCoy was buried in Poly Archer Cemetery in Tyler County and that he died on November 1, 1877. Despite this clue, the Tyler County Court has no record of Joseph McCoy’s deat. 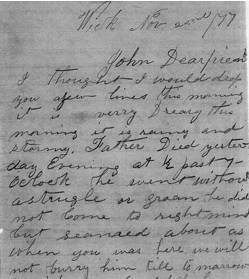 Part of Letter from Ralph Gorrell to J.W. McCoy (courtesy Ellen Sutton)My dear cousin sent me two letters written by Joseph McCoy’s son in law, Ralph Gorrell. One letter written on October 31, 1877 describes Joseph McCoy’s deteriorating condition, and the other written from Wick (Tyler County) on November 2nd, 1877 describes Joseph’s death (called “the change”) the day before. Even more than these priceless mementos, I enjoy chatting with Ellen, who shares my passion for tracing our family history. As my sister reminded me, it’s nice you are actually finding some living relatives!

There are many avenues to help you find your roots—relatives, family keepsakes, courthouses, books, the web, historical societies as well as family researchers. To reach Carol P. McCoy, please visit Find-Your-Roots.com. Email: .