Ever the teacher, McCoy coaches on business and genealogy 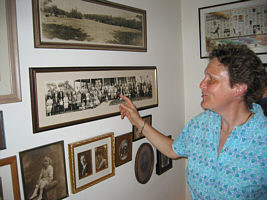 By the time she saw her first grade teacher conduct a class, Dr. Carol P. McCoy had decided that she wanted to help others learn new things. So began her career of learning, teaching, coaching and writing. While she didn¹t know then where her career would take her, looking back today, it's clear she has followed her heart and found jobs and experiences that have made her happy. It's one of the lessons that McCoy teaches others. "I like helping people to do what is fun - helping people learn what they are excited about doing," she says.

From her charming 1850s farmhouse near Falmouth's Town Landing Market, McCoy is conducting two businesses, unrelated to the other, but both derived from her passion for teaching, learning and self-discovery. There's her consulting business called McCoy Training & Development Resources (MTDR) and then there's her genealogy business called Find Your Roots. While her genealogy business is newer than MTDR, she plans to make her work schedule allow for a 50/50 split between the two. Her other goal is to keep her work travel down to 25 percent of her schedule. McCoy will tell you that setting goals and envisioning a clear future is important to realizing success. Without a clear picture of where you are going, how will you know when you've gotten there?

McCoy began her journey growing up in Bronxville, New York, where she says she learned her love of baseball and collecting baseball memorabilia from her father. "I was a Yankees fan from birth," she says adding, "baseball is the thing I love most in the world." Her father taught her how to keep score and she found she really liked documenting the game, watching and recording how the drama evolved.

As an adolescent she coached softball. She taught French and guitar. By the time she got to Connecticut College for Women for her undergraduate studies, "Everything just opened up," she says of the many mentors she met and the learning she pursued. Her graduate studies in psychology were completed at Rutgers and by age 30 she had her doctorate and had already been teaching college level psychology classes for nine years.

In the 1980s, she decided to go after a better salary than what was available in an academic career. She made a bold move to Chase Manhattan Bank where she would create its management development division from scratch. "I was pretty intimidated going from education to business," she said. Unlike an academic environment, the business world meant a focus on profitability and immediately applying what had been learned from the training she was developing.

As the 1990s approached, McCoy was ready to leave Wall Street. She says she always knew she would live in Maine someday. She had been coming to Maine as a child and both her parents' families had summer camps in Vacationland. With a clear goal of leaving New York and as if pre-destined, a perfect job opportunity became available at UNUM Provident.

As she moved to Maine she also was working on a book she had been asked to write. In 1993 she published "Managing a Small HRD Department: You Can Do More than You Think." The book was a tool kit for small HR departments with limited resources and included checklists, worksheets and ways to apply her first-hand knowledge.

The second book she was invited to write was a series of case studies called "In Action: Managing The Small Training Staff."

Both books propelled McCoy into an expert role which meant speaking engagements and teaching arrangements. While working at UNUM, she also taught at the University of Southern Maine. As a guru in the HRD field, McCoy not only teaches her approach but also trains the trainers of the HRD discipline. "I've learned the delicate art of giving feedback to other trainers," she said. She also coaches people on the art of delegation. "It¹s how to get people to get excited about what you¹re doing."

At the close of the '90s and happily living in Maine, McCoy chose early retirement from UNUM when the company downsized. She continued her speaking engagements and began her consulting business, MTDR. Her brochure says MTDR's mission is: "To help organizations and individuals achieve their goals by providing solutions to increase their effectiveness and resilience in a constantly changing world."

It was her interest in her family's roots to Maine which found her researching her own genealogy. As she learned more about tracing her family's roots, she decided she wanted to help others get past the roadblocks of finding their family history. Her Find Your Roots business helps people find more than just the dates and places of family origins. She strives to help people discover the family stories and investigate myths carried over generations. McCoy is a member of the National Genealogical Society, the NY Genealogical and Biographical Society, the New England Historic Genealogical Society and the Maine Historical Society, as well as the Falmouth Historical Society and other related genealogical groups in the region.

And, true to herself, McCoy hasn't wavered much from her first grade epiphany of a passion for learning, teaching and documenting. And, of course, there's always baseball.